Negan has just turned 2 years, some of you may have seen my previous thread regarding his pneumonia treatment. Bit of background - he had a bad choking episode about November time which he couldn't clear himself and he went to the OOH vets for oxygen therapy and he was given anti-inflammatory inj at the time and a weeks course of baytril to cover him. He was doing well and I only heard him being a bit snuffly for a day or so after the choke.

But a few weeks later I saw his abdomen heaving when he was breathing, so back to the vets we went. At the vets he was open mouth breathing and gasping, he was doing this at times when eating as well. He was diagnosed with pneumonia and has had 30 days of ronaxan (20mg 1/4 tablet twice per day). A few days into this treatment he was doing much better - no visable abdominal effort when breathing and he was only gasping a couple of times when eating wet food which was a bit thick for him so we avoided this food. He has lost some weight but soon put this back on. We also added metacam in 0.3ml once per day as I was still noticing symptoms and asked for steroids but the vet dispensed metacam instead. He also has bisolvon once per day and we were steaming him in the bathroom a couple of times a day which seemed to really help at the beginning.

Near the end of this treatment/past few days he has gone downhill, is back to gasping for a 30 secs or so when eating or gasps the whole time he's out of the cage (for clean outs) and you can see his abdo is heaving again when breathing. When he is gasping he jumps/climbs to the top of the cage, I imagine in panic/to get more air

Obviously it must be horrible to struggle with breathing, yet in himself he is fine. Eating as normal and active as normal, despite he has lost weight again. I'm taking him to the vets tomorrow at 9am, I am thinking of asking for an X ray. The vet thinks the infection has cleared up but we don't know if it's lung damage what he's left with now, not sure how much as X ray would show but if it shows considerable damage to his lungs I think putting him to sleep may be best for him? It's upsetting because he's otherwise bright and tries to act as normal but everywhere I've read seems to suggest PTS when gasping/increased abdominal effort to breathe is present.

Any advice/tips would be greatly appreciated. Also I normally take his brother, The Governor, with him to the vets for comfort. Would you take both if it's likely to end in PTS, I think it would be beneficial for The Governor to see Negans body afterwards perhaps? But then he's likely to get stressed on the journey as well.
Negan and The Governor

I would definitely want more diagnostics at this point as it's pretty clear that there's something serious going on, and previous treatment has not resolved it. I haven't dealt with severe respiratory illness myself so I don't know if an x-ray would be most useful, but that's something that the vet will hopefully be able to discuss with you.

At my vets, x-rays and other procedures requiring anaesthesia are usually done in the middle of the day, alongside operations. The patient is generally booked in for the day as a result, so I always make sure they have a companion rat with them to keep them company while they wait.

Thank you for the reply.

Yeah my dog is being admitted at 9am as he is staying for the day for his regular bloods/abdo scan to monitor his ongoing conditions. When I called to see what appointments they had available for me to bring Negan too they advised I could bring him for 9am also incase he is admitted for an X ray. So far X ray is all that's been mentioned. They said they should be able to do the X ray straight away whilst I wait so small furries can get back to their own environments as quick as possible.

I didn't think about the association of the vets and death. I suppose I won't know until I'm there what the vets thoughts are re investigations/likelihood of PTS as I was thinking if (hopefully) the X ray is done straight away and if the prognosis is poor it may be kinder to let Negan go there and then so The Governor will have only been there to provide a bit of support on the journey (and I thought him seeing the body after would allow him to grieve), but he himself is a bit slower these days and neither of them like being transported.
Negan and The Governor

Just to update, I've left him (with The Governor) for an X ray. Vet was very good I thought, advised if his lungs are very damaged it may be kinder to let him go there and then, which I agree. If his lungs show he's getting adequate oxygen then we can try steroids and a combination of antibiotics to keep him comfortable. Just got to wait for the phone call now! For Negan and my dog who is also there for treatment today.
Negan and The Governor

The vet and I agreed it would be unfair to wake him and we would be unlikely to be able to keep him comfortable so we let him pass away under the anaesthetic.

At least we had an answer and he got an extra month or so with us from first becoming ill.
Negan and The Governor

So sorry for your loss. As hard as it was I think you made the right decision.

Best wishes to you and The Governor, and I hope your dog is ok.

I'm very sorry; that was absolutely the right decision. I was fearing it might be something like an internal tumour given the symptoms.

Thank you both. I'm shocked at the size of the mass, and how Negan did his best to carry on as normal. His activity never changed, nor his appetite etc bless him. 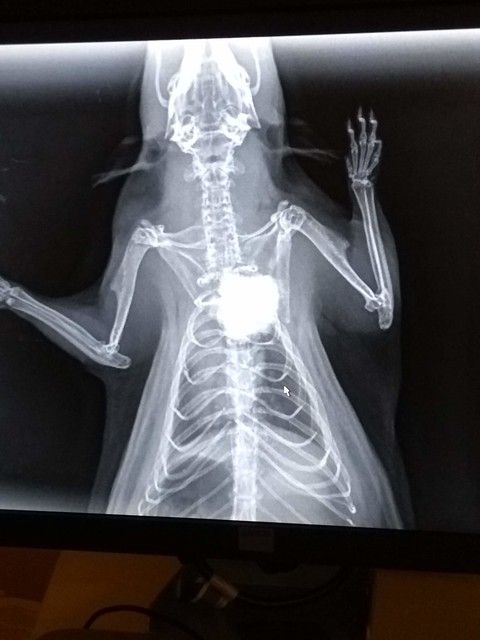 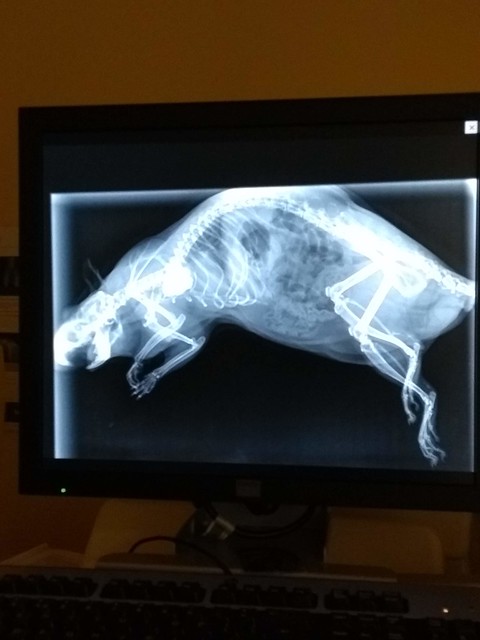 I'm keeping a close eye on The Governor, so far he's sleeping in the hammock but is getting up and asking for food as normal. I've had most rats cope ok, but one who grieved very badly as our only option was to get some baby rats we felt. So far haven't found any breeders in my area/or rescues but we'll see how The Governor goes. These two were my first breeder rats from West Yorkshire.
Negan and The Governor

So sorry to hear about your loss! Has the The Governor other friends or is he on his own?
Top

The Governor is on his own. We've been looking for some baby's for a while but don't live near any breeders now, I work with a lot of rescues through work and rats very rarely come in but I'll be first to know if any do. However I thought perhaps babies aren't a good idea, when we last had an elderly (2 1/2) year rat on his own he got four babies for company and it really perked him up. However The Governor is very slow and not good with his hind legs, he's recently been moved into 'the pensioners' cage which doesn't have much height following a fall in their previous big cage. Baby rats couldn't live in the smaller cage but I don't think The Governor could cope in any other cage.

Sadly I'm very worried The Governor may have a mass or something going on, his breathing was very rapid (head bobbing too as he breathes) but I thought it was the stress of Tuesday. He's been out with me today and having periods of very rapid breathing but no noises/open mouth, he went back into the cage and panicking. Tried to run/climb but struggled but got himself propped up on something and was heaving and did an open mouth gasp for a few seconds. He's settled so I'll ring the vets first thing tomorrow if he's ok until then.
Negan and The Governor

Just to update. The Governor had an X Ray this morning, thankfully no mass but he has an enlarged heart and fluid on his lungs. The vet has started him on medications for congestive heart failure with injections today and time in the oxygen chamber, I have the same oral meds to give tomorrow and he's back on Tuesday to assess his response. In hindsight, him slowing down/struggling with climbing and sleeping more is likely to have been his heart, not age/hind leg problems bless him.
Negan and The Governor

Thank you. His breathing has slowed down a little but he's still very lethargic and not eating or drinking. I've offered soya milk and water mixed with fruit juice to encourage him, alongside all his favourite foods. He did eat a tiny bit of cucumber last night.

This morning he seemed very 'vacant'. He wouldn't open his mouth at all for the oral meds, it was like it was clamped shut and he was swaying/wobbling. I mixed it with lick e lix chicken flavour which he used to go mad for but it was just getting smeared around his mouth, he wouldn't even lick it off or make any attempt to clean himself

Think most of it ended up down his face. He's drank nothing overnight, hard to tell if he's eaten any of his mix.
Negan and The Governor

Hm, those symptoms are a bit worrying. Lack of coordination and being a bit out of it are both suggestive of neurological issues, not so much heart issues. I'd take him to the vet again if those symptoms don't improve soon; he may need a steroid injection. If he's drinking very little, check he's not becoming hydrated; you can do the pinch test: pinch and gently pull up the skin at the scruff of his neck, and see how quickly it springs back to its original position. If it takes a while, he's likely to be dehydrated. (Though if he's lost weight recently, that can lead to there being a bit of excess skin around and the pinch test may give false positives.) If he is dehydrated and still not drinking, he may need subcutaneous fluids as well.
Poo-shoveller to: Calyn (NLA32); Zephyr Nyahir; Zephyr Zymandis; Zephyr Blasto.
Fondly remembering: Zephyr Mick Jagger "Edgeworth"; Din (NLA28); Zephyr Donovan "Phoenix"; Xeltan; Lita (NLA32); Lia (NLA28); Zephyr Delanynder (NLA28); Falere (NLA36); Mirala (NLA36); Zephyr Opold; Rila.
Top

Thank you, I should've said he had a Dexamethasone injection and sub cut fluids yesterday. I'm gutted to say he died as soon as I checked on him after work.

I offered him some wet cat food jelly and he lapped at it for a bit but then had a panic/shaking/episode and passed away. I wonder if something neurological went on as well, he wasn't right not 'just' his heart.
Negan and The Governor