I am in the slightly odd place of being a fairly experienced rat owner/carer but not having done many intros yet!
I recently took in an sick elderly rat and introduced him to 2 very young bucks which went very very well- they instantly loved him and groomed him and he became their father figure.

But sadly Kevin was put to sleep last weekend as he had deteriorated with a PT.
My 2 young bucks Yoda and JarJar are now around 16 weeks old. They miss Kevin.

I am picking up my 3 new rescue bucks at the weekend, they are a similar age to JarJar and Yoda

The plan is to introduce them to Yoda and JarJar as soon as possible.

Should I take Yoda and JarJar with me to collect them in the car so their carrier introduction starts straight away?
Or should I let the new guys settle in here in a separate cage initially?

Should I expect big problems with introducing 5 rats all in the 5 monthsish adolescent stage to each other?

I have a well equipped SRS for them to all live in eventually. I have smaller cages available for intro period too. I want to give the 5 of them the best possible chance of a successful intro and not mess anything up.

Bring them with you.

Rat Out of Hell Rescue.
Top

Yep I'd bring them along plus a spare carrier in case things don't work out. Then just add them all to one carrier, I doubt at that age there will be much issue, if they don't settle quickly then separate them for the trip home but mostly its as simple as that. Then just follow the carrier method which is in the articles section, bearing in mind you'll be ahead a couple of steps
Jemma
www.isamurats.co.uk
Top

I will bring them with me

The hard bit is going to be watching them in a boring environment while I have their lovely cage sitting empty. I hope they don't take long to settle together.
Top

Good luck with the intro x Keep us posted.
Granny to Buttons and Wispa

Naturenut wrote:Good luck with the intro x Keep us posted.

Yep yep, I will! Very excited to meet my new rattie boys

News- my new guys are home- many thanks to Shiprat

So far things have gone incredibly well.
JarJar and Yoda went with me in the carrier and seemed quite tired when we arrived.
No squabbling or aggressive behaviour on initial introduction, then all pretty quiet when put in the carrier together too.
In the car on the way home Yoda made a pile with the 3 new guys, while JarJar watched me drive from the front of the carrier. His body language is a bit weird- standing very still quite a lot- but he's done absolutely nothing aggressive yet.
All of the rats ate a bit of food on the journey which I'm taking as a good sign- although maybe my driving was too smooth to make them bond in adversity

Having got home I gave them some water which they lined up to have a drink of (I will put in a second bottle to avoid any competition). Now they are all resting quietly. I think this must be too good to be true

I wonder when the fireworks will start? This feels like the calm before the storm.
My other half has had a good look at them now so we are deciding on some new names. They have to fit in with the star wars theme

New rats. How exciting. It all sounds good to me

( in the past if I've had any issues it was always taking them for a drive that helped )
: Anne :
Top

Anne wrote:New rats. How exciting. It all sounds good to me

They all seem tired out bless them

Not a very good picture since it's through the plastic door of the carrier- but they are in 2 piles not one at the moment.
JarJar and Yoda my original guys at the front and Luke, Obi-Wan and Chewy the new guys at the back: 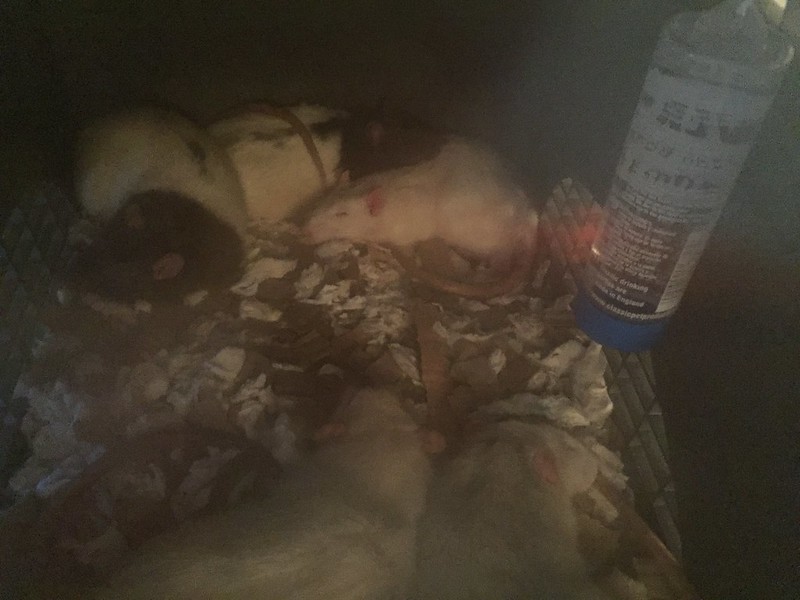 I'm finding this really hard- even though the rats seem fine. They just look so bored

They are tending to be in a pile of 4 with JarJar on his own mostly. No aggression at all as yet.
It's going to be really hard to resist moving them up into a bigger cage tomorrow. I.......must.....be.....strong

Feline wrote: It's going to be really hard to resist moving them up into a bigger cage tomorrow. I.......must.....be.....strong

Rat Out of Hell Rescue.
Top

). I think it was caused by JarJar inflicting his grooming attention on the new guys. He is very insistent when he wants to groom someone and they are not always very appreciative. This morning they are letting him. I think he's going to be the dominant rat.

We are having a bit of free range time in the bathroom with the carrier door open currently. All rats are calm and popping out for a quick explore then back in again. They've eaten every single scrap of the food I put in for them overnight so I think eating must be all they've spent their time doing!
Once they've had a brief chance to stretch their legs it will be back in the carrier.
Top

They have been fine- were all in one pile pretty much all afternoon.
I'm thinking even though tomorrow evening will be only 48 hours maybe they are ready to move into a small cage??

I can persevere in the carrier longer if I have to but I hate seeing them so bored in there especially when there have been no real issues and no fights.

). Placed a Rat Rations order for some more stuff today too!

The new guys (Luke, Chewbacca and Obi-Wan) are really lovely- very tame and sweet to cuddle and they really really loved their treat of a Royal Canin dog kibble this morning.
JarJar (one of my existing rats) tried to chew off my partner's toenail while he was sitting on the loo and they were free ranging earlier- they've never seen bare feet before

It really wouldn't hurt to leave them longer but if you do move to a bare cage you can always take a step back if need be. It's sounding good though

Anne wrote:It really wouldn't hurt to leave them longer but if you do move to a bare cage you can always take a step back if need be. It's sounding good though

I am considering doing this later today, as I am home to watch them carefully- tomorrow my adult son will be in charge for a few hours (although I am only 2 miles away if he summons me

).
All 5 seem to have formed new relationships with each other and I'm not really seeing any avoidance.
JarJar who originally did a bit of a T-Rex statue impersonation has relaxed and I've seen him grooming the others and being groomed.

I will stand by to go back a step if necessary!
Top
Post Reply
27 posts