Hi everyone, I’m new here, and would really appreciate some advice. I am a hamster owner, and usually get my hammies from the rehoming section at Pets at Home, I find this very rewarding. I was there on Tuesday to get some bedding and saw a very sorry looking rat in the rehoming section. I asked the staff his story and from what I understand, him and his brother were sold to a person with one other rat as companions. However, it didn’t work out, and the rats were returned to PAH. Shortly afterwards, they were adopted as a pair, but a day later one rat was returned, as he was now turning on his sibling. This is the rat I saw (Hercules) and against my better judgement, I bought him home with me. Staff at PAH said he could never live with another rat, and that his poor coat was caused by stress. I took this with a pinch of salt, and have booked him a vets appointment. I bought the largest cage they had (70 x 48 x 70) and the substrate they advised, plus food and toys. I was so happy, as I have always wanted a rat, and thought I was doing something good!

Hercules appears friendly and has been coming out several times a day, climbing on myself and my Daughter and being inquisitive. Last night, I decided to let him run in the lounge. Total disaster! He freaked out, and it took us ages to catch him. He was clearly really upset. I think he smelt the dogs and panicked. A sleepless night on Googlehas left me in a total state of panic. He is homed alone which is a big no no, and I have dogs, and he is scared. This morning I feel the kindest thing to do would be rehoming him, but this would break my heart. Please could anyone here advise me what to do? My intention was to get Hercules out of a bad situation and give him a happy life,butI have totally messed up. Thanks in advance, Jackie
Top

), so it's no wonder he's likely to be rather traumatised.

If you wish to keep him, then source two male rats (aged 9-10 weeks) and introduce them using the carrier method (details in our articles). Rats need companions, and if he has hormonal problems then he can be neutered when he's old enough (min 4 months but better at 6 months). How old is he?

If you definitely would like him to go to an experienced home then there are facebook groups which enable rats to find new homes, and we have a rehoming board here. If you don't use facebook then submit a post on here, and I will put the link onto the facebook groups, or if you say roughly where you are, I may know someone who could take him in.
Mary x

yes, I forgot to say Hercules age, which is, I am told, just over a year. I am taking him to my vet this pm for a check up, and will enquire about neutering etc. The cage I have is a Ferplast FuratPlus. Is this large enough for more than one rat? I think my plan of action will be see what my vet says about his health,then discuss with my long suffering Husband about what we do. I can’t find the article about introducing rats, but once I get an idea of what is needed in terms of extra cages etc,I will then decide. Again, many thanks for your help with this, I really only want Hercules to have a good life xx
Top

yes, I forgot to say Hercules age, which is, I am told, just over a year. I am taking him to my vet this pm for a check up, and will enquire about neutering etc. The cage I have is a Ferplast FuratPlus. Is this large enough for more than one rat? I think my plan of action will be see what my vet says about his health,then discuss with my long suffering Husband about what we do.

Well he's old enough to be neutered straight away then (you're lucky your vet is seeing non emergency cases!).
I personally don't feel a FP is big enough for permanent accommodation, but some do - I'd much rather he have company in a slightly small cage than be alone, so don't let that stop you. Also, if you get hold of a second FP then they can be combined to make a tower which will be much better for them in terms of space. The set up section has some examples but frankly it's rather out of date and the layouts could be better! Here's one I put together for a demo. 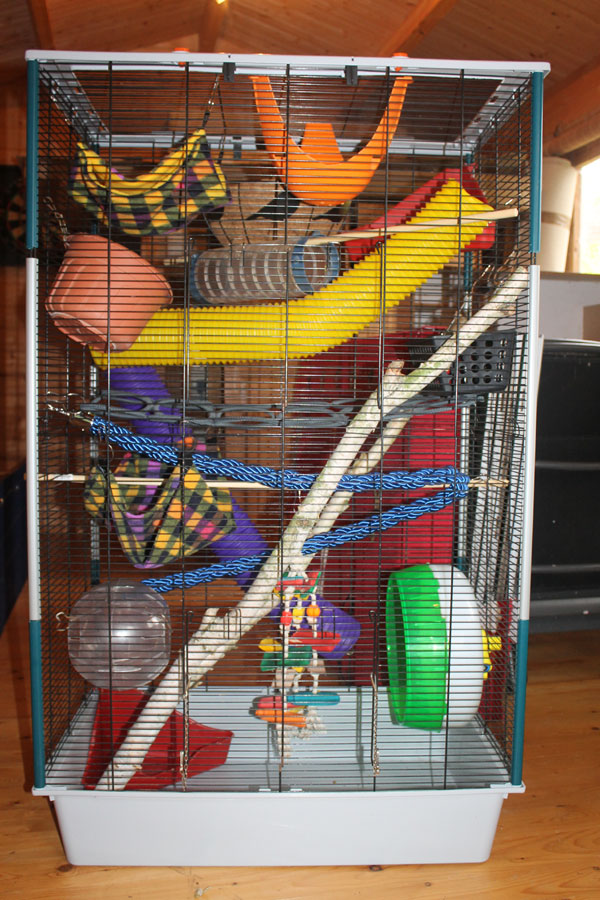 I can’t find the article about introducing rats, but once I get an idea of what is needed in terms of extra cages etc,I will then decide.

Welcome to the forum!

Firstly, you did a really wonderful thing by taking this little guy in, and it's lovely that you bought the biggest cage they had

Also awesome that it's one of the very few cages you can add to should budget and space allow, if only all cages worked that way!! So whatever you decide, just remember that if you hadn't rescued him he could've gone to any random person and they may not have given his needs a second thought, let alone spent half the night on Google. So please don't think you've messed up, he's very lucky to have found you as it's so obvious how much you care and that you want the best for him.

I have no experience with the dog scent issue so hopefully someone else here can advise on that, but if he was happy enough coming out on you guys before, maybe there's another room he could play in and that would solve that? Also he might just have been scared of the big open space especially as it was all new to him. One of mine was scared of all new objects and places the first time he encountered them, and always varied between still wary of them and totally fine with them the second time, funny boy! You could try a much smaller space loaded with items to investigate and hide under/behind next time, then build up to bigger areas. Of course he may be scared of the new items too, so grabbing familiar bits out of his cage and popping them in the play area can help, and fleece blankets to rummage under can be good.

If you and your hubby decide to keep him and need help finding breeders/shelters in your area for some pals, hopefully someone here might be able to point you in the right direction.

For now, try not to get too overwhelmed, he's safe and you're doing your best. I did exactly the same when I got mine. I'd had ratties a long time ago, desperately missed having them ever since, saw these little angels who needed adopting, fell in love instantly, PAH won't reserve them so I had to adopt them near enough right away, then did a ton of reading and convinced myself that I was a totally unfit ratty mum and was terrified that I had done the wrong thing. I was also really worried that they had all sorts of ailments and as I wasn't experienced enough to know for sure ended up taking them to about 3 different vets all of whom said that they looked like happy, healthy, out-going boys.

I thought I would post an update! I took Hercules to my vet last Friday. He gave an injection for mites (further one on Mon) and a course of Antibiotics for Pneumonia. He has had a rough few days, and I was worried I might lose him. He didn’t want to eat, so I have been spoon feeding him and adding the meds to weetabix,yogurt and cooked veg. Basically anything I could get him to eat. Last night I saw a real improvement when I had him out, he was into everything and didn’t want to go back in his cage! He was taking small items from the bookcase and running round with them,so sweet! Regarding a companion, my vet recommended getting him neutered and introducing a female rat. I think this seems a better option, what do people think? He really seems to be a feisty lad!
Top

You didn't say he was ill - pneumonia is very nasty, and if his lungs aren't great that would add risk to an operation, but I'm glad he seems to be feeling better.

Yes you could add girls 2 weeks after he has been neutered if you decide to go ahead, but please add two not just one.
Mary x

I am hoping that he gets a clean bill of health from the vet on Monday,I will then ask about neutering. Should I be looking at baby female rats, or adult rescues? And am I right in thinking I would need TWO further cages, one for the females and one smaller one to do the introductions? I am keeping an eye on Gumtree and Ebay. Thanks again for your support!
Top

Adults or kittens is up to you - but don't introduce doe kittens until they are big enough to withstand any rough and tumble from an adult male, and that's likely to be at maybe 3 months old.

You could re-use the temporary cage the girls start off in as stage 3 in the introductions, just clean it thoroughly while they are in the carrier or hamster cage.
Mary x