I've left it longer than usual between layout changes as Chino (HLD, he can move his back legs still but they have no strength and tend to drag most of the time now) was still getting about most of the old layout pretty well. However, I decided that it was becoming a bit risky when one morning he decided he needed to go to sleep right at the top of the cage and the only route down I could see for a rat with no use of his back legs pretty much involves falling and bouncing off various things on the way down...

So this was how I discovered him prior to layout change (he's the Champers), I have zero idea how he managed it as I deliberately made that bit "too hard for him":

I really wanted to make the cage more accessible and safe for Chino as he's a pretty determined little chap, but I'm also very much aware of the fact I have 5 other rats that appreciate a challenge so I've tried to accommodate them all in this layout.

I've found the yellow tube to be fantastic for him as he can drag his butt up it reasonably easy and sorta... slide back down when he wants. Although he's mainly just using the bottom of the cage and the hammock + litter tray now, he has been right to the top and slept on the blue radiator bed a couple of times and theres enough stuff to catch him if he falls now. If/When he gets to the point he cant climb up the tube anymore then I'll add a radiator bed or similar in the bottom, but for now I'd rather encourage him to climb up there while he still can.
Hannah - Renegade Rats, breeding for Marten and Black
Truffle, Sven, Tyrion, Gendry, Jorah & Hodor
Carol, Michonne, Quaithe & Potatocake
Top

Just taken out the middle of my SRS and really like it as it's keeping them nice and active and will hopefully help keep the weight off. It's home to 7 ladies and 4 gents aged 3-14 months

Little boys are currently in one quarter of the double SRS.

Only just got an SRS this week (upgraded from a furet plus, what a difference!!!) still a bit sparse now but I'm getting there, getting plenty of ideas from this thread!
Top We have two ferret kingdom cages (exlorers), but my one has rusted so badly it cant be used, so we've made do for our rats with what we have, which is half a ferret kingdom for the girls. We have a PetOne ferret cage for the boys, see the "misc small cages (suitable for 5 rats or fewer)" section.

We also have some boys who are being treated at the moment as they're a little unwell, so they are in my hospital tub see the "DIY/ custom-made cages" section

This is my first ever layout without using the shelves or ladders. I don't know why I ever used them, I think I just got stuck in the habit. The only ladder that remains is the one that connects the top and bottom as I use this to separate the cage when I am cleaning it.

I have tried to make the layout as climby and challenging as possible as my boys are perfectly capable of moving around the space without ladders or too easy routes, and because I have been giving them easy options previously they need to now lose a bit of weight and tone up!

Top. A good mixture of loser ropes and small perches. Aiming to develop stretching, jumping and balance. Veg is being hung in harder to reach places as well.

Bottom. As much empty floor space as possible. Harder routes around the cage with bigger gaps between perches swings, tubes etc.

EMILY and the ratties Poppy and Peach (boys!)
Miss you Jezza and Baldy.
Top

My explorer, home to my 4 girls I haven't posted mine in a very long time!!

Currently home to 7 bucks, ranging from 5 months to 24 months (including a HLD lad who stays in the bottom). Apologies for the wonky photos!

This is my SRS, home to 3 pingy girls. It took me a little while to find a layout that suits everyone*, but I reckon this works pretty well. I've tried to keep things open enough to allow them to leap around, but not have overly long drops anywhere since Mirala in particular doesn't see the point in climbing or walking downwards when she can just plummet instead. 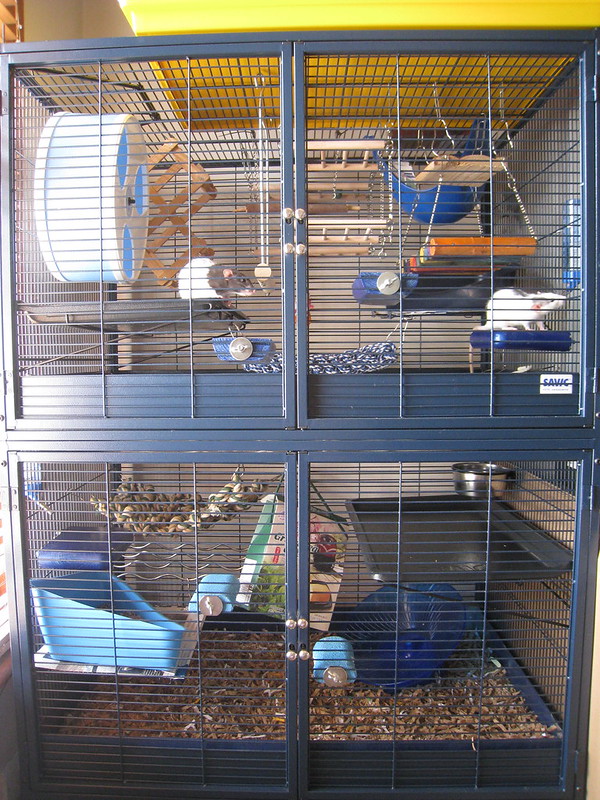 Top half, with plenty of clearance in front of the Wodent Wheel and a platform underneath for those times when someone gets catapulted out, some swingy climbing toys, and an Ikea scarf/tie holder to break falls. I've left out the top half of the Sputnik so they've got better ventilation in bed and can benefit more from the ice pack I put on top of the cage in the afternoons. 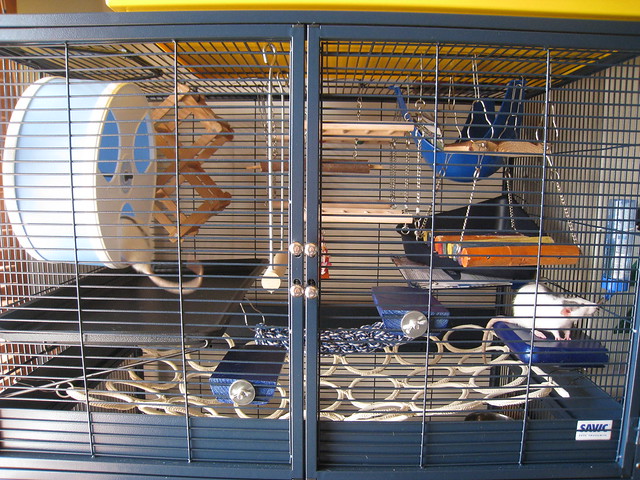 Bottom half, with a metal bottle rack from our fridge which we never use but the rats seem happy to climb over, a hanging box I've filled with shredded paper and a bit of their daily treat ration, and the Flying Saucer that they still haven't really got the hang of using. 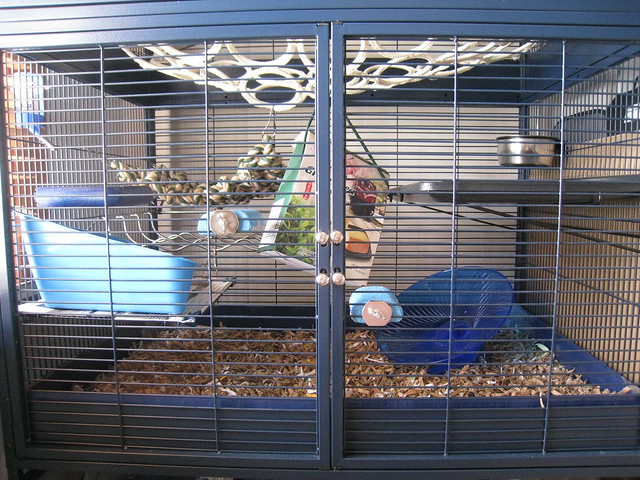 *Daft things I did for the first layout because I clearly was not thinking include: attaching the wheel to the door, resulting in a truly almighty racket; and putting one of the litter trays right next to where I sit at my desk.

My new 2nd Hand Aventura with the middle removed.

You may notice I'm using rammekins instead of wheels to move the cage around. My rats chew cage wheels when free ranging so didn't see the point in using them when I have a slidey floor.
Angharad, Barb, Bella, Carys, Demerara, Ida, Nancy, Sasha, Sinead, Siobhan, Spice, Sugar, Veronica :smileyrat:
53 gone but not forgotten

My ladies have only been here 3 weeks, they are 10 weeks old and this is very much a work in progress and learning curve for me and them! I have been looking through this thread for inspiration and hopefully mine wont look quite so empty now I have a few more ideas.....

It's arrived! The SRS Palace...and we love it.

We decided to remove the middle level so it's one complete open space so today is shopping for more stuff to fill it!

Im hoping the girls will be more active and inquisitive and less likely to chew the plastic trays and/or fleece which is new to us too.

After finally finishing introductions with my boys (various newbies) I have opened up the SRS to a full cage, it's brilliant

This is the top half.

And the lower half

To all those who have filled my heart, have fun at the bridge.
Top
Post Reply
84 posts

Return to “Show your set up”